Most of us want to be happy, and most of us want our lives to be meaningful. And psychologists confirm that we are happier when we feel our lives have meaning and purpose. But what gives our lives meaning? 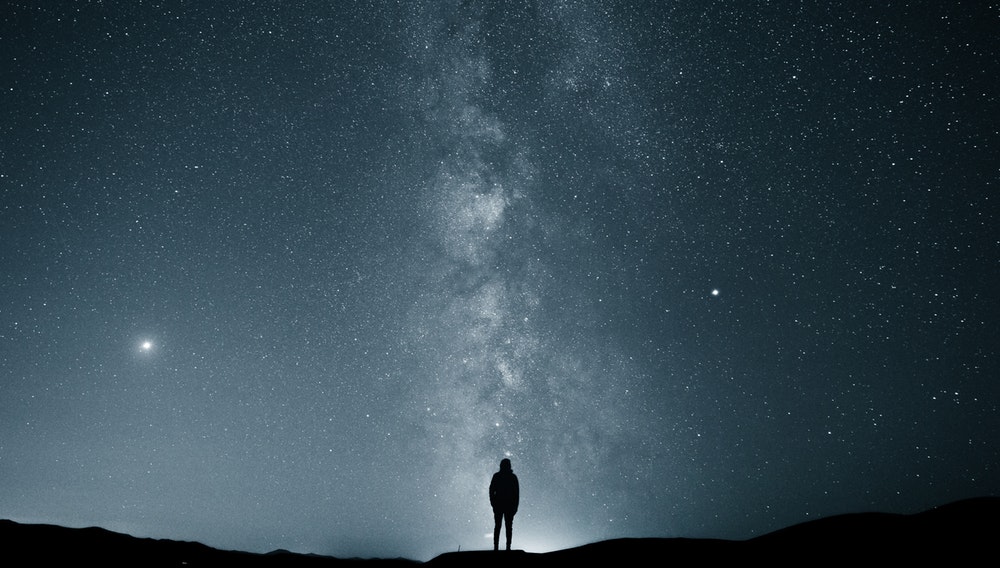 It used to be that religion gave life meaning. Even if life was hard drudgery, or worse, dangerous and painful, the hope of a better life in the age to come gave meaning and purpose even to the suffering. But with religion in decline in first world countries, what gives lives meaning now? Some say nothing can. But most say we can, and have to, choose our own meaning and invest our lives in that. Religion, particularly organized religion, provides many people with a sense of purpose and community. Religious communities can have many beneficial effects and often sit at the core of a person’s cultural identity, but that does not make the claims of those religions true. In reality, religion itself does not assign meaning to an individual’s life. Instead, individuals choose to give their lives meaning through the activities they pursue and the convictions they hold. Meaning can be found outside of religion, and seeking one’s own meaning in life can be far more fulfilling than following the rules of an outside religious authority.

But does it work? Can life have meaning without God?

We all have an understanding of what makes life meaningful for us, although it isn’t easy to put it into words. But it has something to do with:

So is meaning subjective: we can we simply choose whatever we like to make our lives meaningful? Or is it objective: only some things meaningful, and we have to find what they are?

Not surprisingly, there are different views on this. Here are five.

Positive psychology – we can all find our own meaning

This excellent article by Courtney Ackerman summarises so much about meaning in life – different definitions, theories (modernism, logical positivism, postmodernism and existentialism), and how we can find meaning. It is well worth reading.

Generally, the definitions of meaning she quotes include the components I’ve listed above.

Courtney is noncommittal about God. She follows positive psychology in recognising that religious belief can provide meaning, and recommends reading the source books for several world religions, but doesn’t believe that belief in God is necessary for life to have meaning.

In the end, she concludes that “the meaning of life is different to each and every one of us. …. it is truly up to us to tease out that which is the most important, the most life-giving, and the most significant. Within this soup of values, experiences, goals, and beliefs, we can piece together that which gives us the best sense of meaning in our own lives.”

Anthony Synott agrees, offering a dozen different sources of meaning we may choose, mix and match, and so construct a meaningful life.

Positive psychology provides many helpful insights into happiness and meaning, and we can all surely learn from it. It tends to show that many of the “old-fashioned” virtues are still worth embracing. However, I sometimes wonder whether it works for people who experience depression or deep grief, or whose life is “unsuccessful” in love, health or career. Or those living in poverty, or in a war zone. It may be hard for such people to find meaning through the things Courtney suggests.

The purpose is one thing, the meaning is another 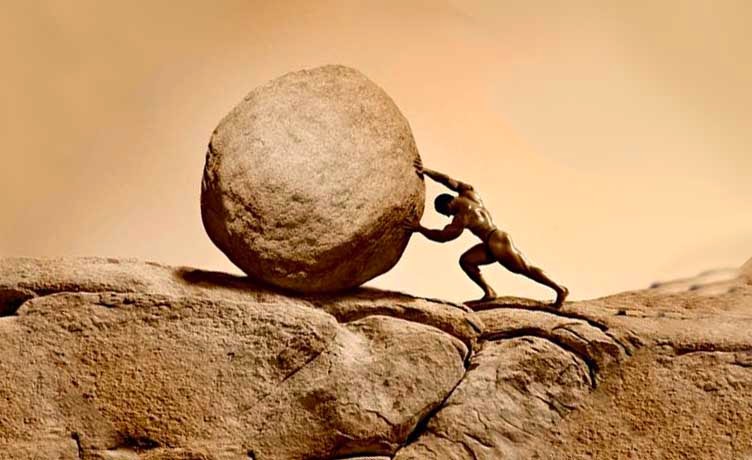 Dan Kent distinguishes between purpose and meaning and illustrates with the Greek legend of Sisyphus. He was a mythical king who offended the gods, and so he was condemned to an eternity of pushing a heavy boulder up a steep hill. When he finally got it to the top, it rolled down the other side, and he had to start all over again. And again. And again, for eternity.

Kent argues that Sisyphus had a purpose, but no meaning. Purpose, he says, is local and contingent, it explains why we do some particular action. But meaning is much larger, involving the ultimate reason behind the action. Again he uses an example. If life is a train track and we are a train, the purpose is moving along the track from point A to point B. meaning is the reality that point B is somewhere actually worth reaching.

Lack of meaning is inevitable in a universe without God, he says. “Meaning, by definition, is something that is meant to be. It requires intention. But you can’t have intention from a source—like a universe—that does not have the capacity to intend.”

On the other hand, he says “a universe created by God can, therefore, have intention ….. It can have meaning.”

Kent’s definition of meaning is perhaps stronger than what positive psychologists use. They say that we choose the meaning of our lives – we can choose whether reaching point B is satisfying to us or not. But his definition is more objective, and it seems clear that the possible meanings suggested by positive psychology can never be objective in the way Kent envisages it.

The Evolution of Morality 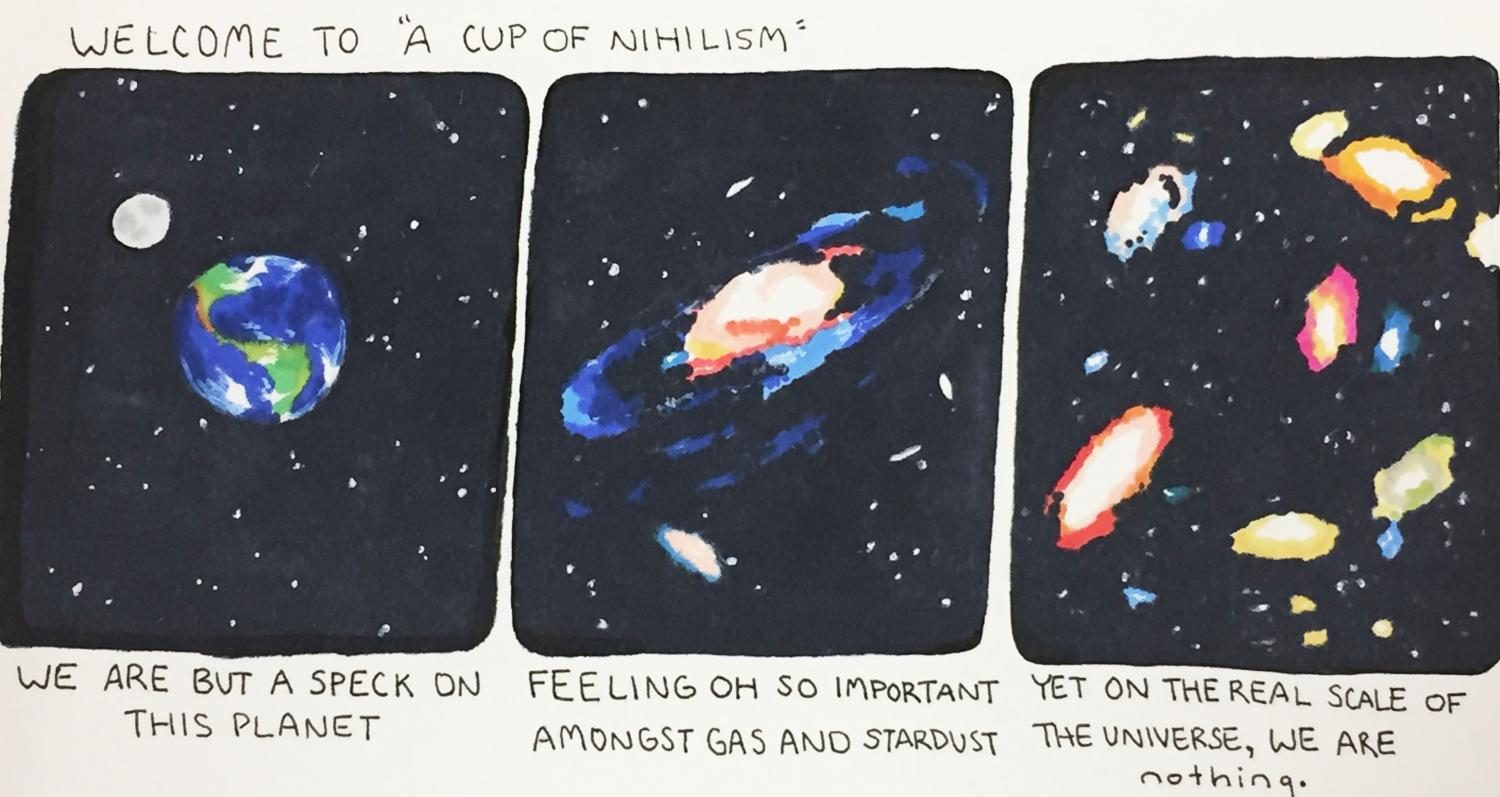 Nihilism is the view that all values and purposes in life are without any real basis, and therefore that life is pointless, absurd. For some, this view follows logically from concluding that no God exists, though that conclusion isn’t so common these days.

Nihilism, if followed consistently, can easily lead to pessimism and despair. But psychologists know that despair and loss of meaning reduce well-being, and so makes life far less happy and purposeful, so the jump from atheism to a sense of meaningless is generally discouraged.

Even a “hardcore” atheist and determinist like Alex Rosenberg, who believes there is no meaning in life, no free will, no morality, nevertheless recommend embracing the reality of atheism as a “rigorous, breathtaking grip on reality.” It appears for him there is no point to anything, so we should just try to enjoy whatever we choose to do. This is a “nice nihilism, surprisingly sanguine perspective atheists can happily embrace”.

Many philosophers, both theistic and atheistic, disagree with Rosenberg’s conclusions, and critics don’t find his bleak perspective to be helpful or attractive, but his response is that it is the truth. But truth or not, it seems few people can live that way. Psychologists recommend we seek or construct our own meaning in life, which is contrary to Rosenberg’s nihilism.

God isn’t helpful to the meaning

Some psychologists are less committed, and some even critical, of any connection between God and meaning, and so have a harder edge than positive psychologists to their belief that we can construct our own meaning.

Gleb Tsipursky teaches that while having purpose and meaning in life is important for wellbeing, “the source of the purpose itself is not so important.” Each of us is free to work out our own answers. He says that: “Religion is only one among many ways of developing a personal sense of life meaning and a greater sense of personal agency”. So he concludes that “Religion is optional”, but you get the clear impression he finds science and choice much better options.

Daniel Florien is an ex-Christian who believes his life as an atheist is as beautiful, exciting and meaningful now as when he was a Christian, perhaps even a little more so. He admits his life doesn’t have any “absolute purpose”, but finds creating his own purpose to be “thrilling”. He says “Life is as happy and meaningful as you make it”.

Neel Burton agrees that “the meaning of life is that which we choose to give it”, but he thinks belief in God takes away from meaning. He appears to be an atheist, but, he says, even if God exists, we don’t know what purpose he wants for us, and “unless we can be free to become the authors of our own purpose or purposes, our lives may have, at worst, no purpose at all, and, at best, only some unfathomable and potentially trivial purpose that is not of our own choosing”. He also argues against Dan Kent’s view that we need objective meaning and purpose, not just subjective, saying (rightly, I think) that things can have a purpose even if they weren’t created with a purpose.

But he seems to have missed that Christian belief claims to know God’s purpose in creating us, and he ignores Kent’s distinction between purpose and meaning.

Overall, this more negative view of the role of religion in giving life meaning seems to ignore the fact that studies show that religious belief and practice seems to lead to a greater sense of wellbeing, happiness, health and meaning. It may be that the same outcomes can be achieved in other ways, but it seems that it rarely works out that way in practice.

He then argues that discovered meaning is better than created meaning in three ways.

Keller is, of course, a Christian, and so believes that the God he believes is true is able to give life meaning that is rational, communal and durable, and hence “better” and more meaningful than the meaning we may construct for ourselves.

We Are Free to Create Our Own Meaning

There is no single outside force imposing meaning on the events of your life. There is no evidence whatsoever that people’s life events conform to some sort of divine plan or predestination. Life is, objectively, meaningless; given the size and scope of the universe and our tiny role within it, it’s absurd to think that we might have any sort of cosmically vital role.

The lack of external meaning to our lives can grant us a pleasant sense of freedom. Rather than being tethered by an outside force, we are free to explore the universe, seek answers to profound questions or enjoy simple pleasures, like sex and food. We have the ability to create meaning for our lives by setting worthwhile goals, working to improve the lives of those around us, enjoying our time on earth, making connections to other humans and loving our families. All of these activities are worthwhile, and none of them require the existence of God.