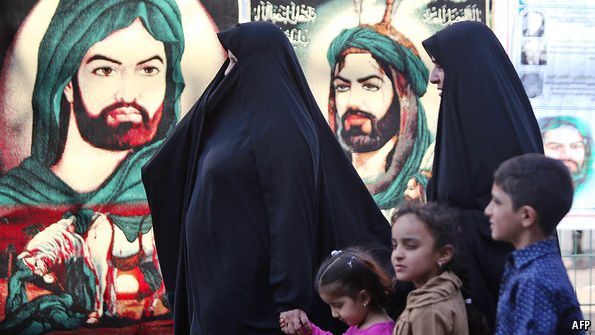 There is no God but one God, yet different forms of Islam are fighting for their own version of Islam. The two branches of Islam split during the great fitna, or strife, over the succession to the Prophet Muhammad. Sunnis claim that the leadership passed down the line of the four rashidun (rightly guided or perfect) caliphs who had been the Prophet’s companions: Abu Bakr, Omar, Uthman and only then to Ali, the Prophet’s cousin and son-in-law. After that the mantle passed to the Umayyads in Damascus, followed by the Abbasids in Baghdad. Shias say the succession was usurped. It should have passed through the family of the Prophet, first to Ali and later Hussein. But Ali was murdered in Kufa and buried nearby in Najaf, whereas Hussein was killed in a battle against the Umayyads in Karbala and buried there—hence the importance to Shias of the two cities. Shia leadership then passed down a chain of imams that broke off at different points, according to their sect—eg, the Zaydi “Fivers”, the Ismaili “Seveners” and the majority “Twelvers”. Twelver Shiism became the state religion of the Persian Safavid empire, which is why hardline Sunni Arabs tend to regard the Shias as foreign enemies, even non-Muslims. 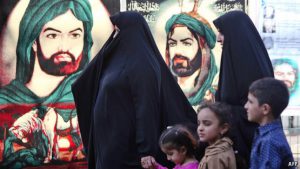 Shias are given to emotional commemorations of the martyrdom of Ali and Hussein, including public self-flagellation. They are often accused of revelling in al-madhlumiya, or “victimhood”. These days, though, it is often Sunni Arabs who feel and behave like the underdogs. Though they make up the majority of Muslim Arabs, Sunnis often feel disenfranchised in the Arab heartland—sidelined by the Shia majority in Iraq, under murderous attack by the regime of Bashar al-Assad in Syria (dominated by Alawites, an offshoot of Shiism), intimidated in Lebanon by Hizbullah (a powerful Shia militia), and dispersed and occupied by Israel in Palestine. In Yemen, they have been ejected from power by Houthi fighters, issued from the Zaydis.

International brigades of Sunnis and Shias now confront each other in Syria. Those fighting for Mr Assad include Shia recruits from Iraq, Afghanistan and Pakistan, led by Hizbullah and senior officers of Iran’s Revolutionary Guards Corps (IRGC). Against these stand t,wo broad groups: the jihadists of Islamic State, made up of volunteers from many countries, and looser alliances of Syrian Sunni rebel groups supported to varying degrees by neighbouring Sunni states, mainly Saudi Arabia, Turkey and Jordan. Suicide-bombings, the poor man’s guided missile, were first adopted by proto-Hizbullah in 1983; they were copied by Palestinian Islamists and are now a favourite tactic of Sunni jihadists.

Islam is more than ever the cause for which everyone claims to be fighting. But which Islam? Eugene Rogan of Oxford University argues that the fate of the Arab world will be determined by the contest between three versions of Islam: the Muslim Brotherhood and salafi-jihadism (both Sunni) and the Shia doctrine of the “rule of the jurisprudent”. At least two other trends are important, too

Islam holds great political power. Muhammad was not only a religious prophet but also a temporal ruler and warrior. Islam was spread by both the word and the sword. For many Muslims, Islam is not just a personal faith but also a blueprint for organising a perfect society. The Western notion of separating religion from politics is regarded as nonsensical. Muslims regard their religion as God’s final revelation and the Koran as his actual word. Some groups thus tend towards literalism. Muslim reformers seek to play down the “sword verses”—eg, “slay the idolaters wherever you find them”—but jihadist ideologues dismiss this as fake Islam.

It is often said that Shias cannot believe they have won power and Sunnis cannot accept they have lost it, which perhaps makes the strife more vicious

In the early years after independence, Arab monarchies enlisted the support of the Muslim Brotherhood against nationalists and leftists. Islamism flourished after the 1967 war, when Israel’s victory over discredited nationalists. The year 1979 was particularly eventful: Egypt signed a peace treaty with Israel (for which its president, Anwar Sadat, was assassinated by Islamists); Ayatollah Khomeini came to power in Iran, energising Muslim radicals of all sorts; Juhayman al-Otaybi led a group of radical gunmen in seizing the grand mosque in Mecca and calling for the overthrow of the House of Saud; and the Soviet Union invaded Afghanistan, which prompted the Saudis (and America) to support those waging jihad against the communists.

The arrival of American troops in Saudi Arabia in 1990 to eject Iraqi forces from Kuwait, and for years to keep Saddam in check, set Osama bin Laden on the road of jihad against America. Al-Qaeda’s attack on that country in 2001 provoked George W. Bush’s decision to topple Saddam, overturning the sectarian balance in Iraq and in the region.

It is often said that Shias cannot believe they have won power and Sunnis cannot accept they have lost it, which perhaps makes the strife more vicious. Iraqi jihadists deliberately provoked the Shias. An intercepted letter from the late Abu Musab al-Zarqawi, the leader of al-Qaeda in Iraq and forefather of today’s Islamic State, argued in 2004 that the fight against American occupiers would be easy. The real danger, he said, was the Shias, “the crafty and malicious scorpion”. He would goad the Shias into a sectarian war that would “awaken” the Sunni world.

Zarqawi’s other obsession was to declare an “Islamic state”. This had been a distant objective for both al-Qaeda and for the Brotherhood, but Zarqawi and his followers wanted to hasten its coming. Various incarnations of his group carried the name, though many senior recruits came from Saddam’s Baath party. After breaking away from al-Qaeda in early 2014, and capturing Mosul in June that year, the “caliphate” was declared by IS’s leader, Abu Bakr al-Baghdadi: “Rush, O Muslims, to your state. Yes, it is your state.” His pretensions to a caliphate, disregard of Islamic tradition and sectarian tactics were disavowed even by al-Qaeda. Though weakened, it is IS that makes the headlines and gets the recruits. According to Stephane Lacroix of Sciences Po in Paris, “Al-Qaeda and Islamic State are like Trotsky and Stalin: one wants to wait for world revolution, the other wants to build ‘socialism in one country’.”

The emergence of IS was a startling comeback for a group that had been all but destroyed by America’s military “surge” in Iraq in 2007-08. Its revival was rekindled by three factors: America’s withdrawal in 2011; the disenfranchisement of Sunnis by the Shia prime minister, Nuri al-Maliki, who packed the army with loyalists and cut off the Sunni tribal forces created by America; and the violent breakdown of Syria, which allowed IS to establish a strong base.

Why Islamic Laws Are Not Applicable in Today’s World 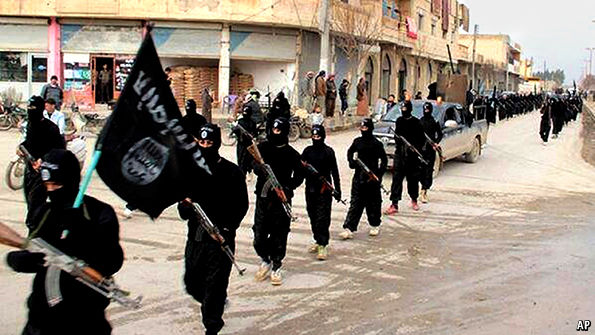 Marching for the caliphate

The merging of the Syrian and Iraqi wars into one conflict makes for strange alliances. Iran acted to defend both the governments in Baghdad and in Damascus; America is allied with Iraq but, at least in theory, against the Syrian regime. Russia says it is fighting IS but is mostly saving Bashar al-Assad from other rebels; Syrian Kurds are allied with America against IS; and with Russia against other rebels.

Sunni rulers, especially the Al Sauds, see themselves encircled by malign Shias, from Iran’s perceived attempt to stir up Shias in Bahrain to Iraq, Syria, Lebanon and Yemen. “Iran wants to re-establish the Persian empire,” says one senior Saudi official. Saudi Arabia went to war in Yemen after the Houthis seized the capital, Sana’a, and moved to take the port city of Aden. In Syria, meanwhile, Saudi Arabia had worked closely with Turkey to turn the mainstream Syrian rebels into a more coherent force, helped by deliveries of American-made anti-tank missiles. One reason the Al Sauds act as the champion of the Sunni cause, says one insider in Riyadh, is that they are trying to draw young Sunnis away from Daesh.

Iran, for its part, is grateful to Syria as the only Arab country that stuck with it during the long war against Iraq, and sees it as a vital bridge to Hizbullah. But it usually favours strong client militias within weak states, as in Lebanon. And these days Hizbullah’s claim to be the main shield against Israel for all Muslims is unconvincing; instead, it has become the spear-tip of the Shias.

Even where there is no Shia-Sunni sectarian divide, there are still proxy conflicts. Turkey and Qatar are the prime supporters of the Muslim Brotherhood; Egypt, the United Arab Emirates and, to a lesser extent, Saudi Arabia oppose them. In the divided politics of Libya, the pro-Brotherhood allies support the “Dawn” government in Tripoli, while the others back the “Dignity” coalition in Benghazi.

Since the coup in Egypt in 2013, the Brotherhood has been on the back foot. Its exiles in Istanbul and Doha bemoan the incompetence of Muhammad Morsi, Egypt’s short-lived Brotherhood president. By forcing through a contested constitution and alienating liberals he created the climate for the army to oust him. Some fellow Brothers from other countries had urged him to be more conciliatory. “Had the Muslim Brotherhood played their cards differently, they might have avoided the coup entirely,” says H.A. Hellyer of the Atlantic Council, an American think-tank. “They were thrilled—wrongly—by the idea they were living in a new age, and no longer needed to hold back.”

In Tunisia, Ennahda, a party inspired by the Brotherhood but no longer part of it, moved more cannily. It had won a plurality of votes in the constituent-assembly election of 2011 and ruled in a broad coalition. As jihadist violence gathered pace and Mr Morsi was overthrown, Ennahda eventually yielded on several points of the constitution, allowing it to become more secular than the party had wanted. It handed over to a technocratic government in January 2014, after the constitution was agreed upon.

Morocco largely avoided street protests in 2011, and the king appointed an Islamist-led government in November of that year. As part of a broad counter-radicalisation effort after a spate of terrorist attacks in Casablanca in 2003, the Moroccan state has been gradually seizing direct control of the mosque. A new school for imams, including foreign ones from sub-Saharan Africa as well as France and Belgium, opened in Rabat in 2015. It seeks to promote a moderate form of Islam, based on Morocco’s Maliki school of thought and, crucially, acceptance of the king’s traditional status as “Commander of the Faithful”.

It has also begun a pioneering programme to train women as mourchidas (spiritual counsellors). One of them, who did not want to be named, explained that her task was to work with women and children on a range of issues, including literacy and fighting drug abuse. “We sometimes come across preachers who promote a radical message. We have to intervene to tell them to change their discourse. When we started there was more religious radicalism; we have noticed that it has dropped.”

The risk is that all this will be dismissed by some Muslims as phoney “state of Islam”. Still, the campaign seems to be having some impact. Take the experience of Abdelkrim Chadli, a Salafist preacher who was arrested after a series of suicide-bombings in Casablanca in 2003, accused of inspiring jihadists (which he denies) through his writings. Pardoned by the king in 2011, he is now urging fellow salafists to join a royalist shell party called the Democratic and Social Movement (founded by a former police commissioner). Within three or four years, he hopes, it could win elections and hasten the process of Islamising society. It is a striking transformation of Islamists’ stance, brought about in part by fear of the sort of chaos seen elsewhere, in part by the firm limits set by the king, and in part by his good sense in giving Islamists a political outlet. “Today all salafists are the first defenders of the monarchy,” says Mr Chadli, “We consider Morocco to be an Islamic model—even with the drinking bars.”