After in-depth analysis, research, comparative studies and observations now I believe all religions are the product of man, The question raised here is much broader in the sense that I ask if any religion is true, or is the entire belief in religion and God (Gods), based on a falsehood or misconception, and that there is absolutely no basis in truth for any of it, other than as wholly man made social construct.

The idea of God is purely a human invention passed on through the generations from those who didn’t know any better. The idea of a God or gods is simply the way human beings explain things that are too difficult to understand or unable to explain.

Some state that belief in the supernatural ignores science and embraces superstition. Therefore, the idea of God a fantasy entirely based on ignorance and concocted by our forefathers before science proved it to be false.

Let us look at Origin of Monotheistic Religion

The origin of three major religion and monotheistic systems: Monotheism (a belief in one God or one god concept) is the base of the Judeo-christian-muslim line of religions, which started with a man named Abraham in about 2000 BC. From this point in history, God began revealing Himself to the world through the nation of Israel. The Jewish Scriptures record the journey of the Israelites from slaves in Egypt to the “promised land” in Canaan under the leadership of Moses. During a period of about 1500 years, God revealed what became the Old Testament of the Bible, relating the history of Israel with the character and laws of God. During the period of the Roman Empire, Jesus Christ was born in Bethlehem as the long-awaited Messiah. The ministry of Jesus ended in about 32 AD with His crucifixion and resurrection. After Christ’s ascension into heaven, the Christian church grew in His name and the New Testament was written. About 600 years later, Muhammad began preaching in Mecca. Muhammad believed he was the ultimate prophet of God and his teachings became the precepts of Islam as recorded in the Quran. 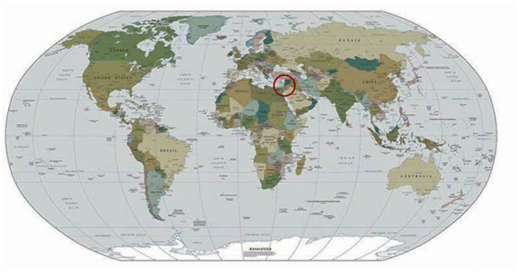 Every single action of Monothestic God, Including every chosen prophets In Torah, Bible and Quran occurred within the red circle on world map as shown in above image. Seems legitimate

“Just think for one second, if God or a messenger of God had written that Quran, Torah and Bible, how come the writings only occur within a very limited period in human history? Also, consider the fact, that a human writing on a piece of paper, or a few pieces of paper, is not the word of God. If they were really written by a universal God or entity, the books would not be limited to some pre-medieval costume drama but would encompass all universality, history, the future and science. Language is something created by man, not an all-seeing, all encompassing entity. God would presumably be universal and timeless as well as all-knowing, as is the universe, therefore these man-written books and scriptures, are just that, man-written linguistically created nonsense used to control men and women thousands of years ago. Why would God write anything anyway? One must consider the fact that, even now, there are religious zealots and ordinary people still entrenched in a control belief system that is so far removed from reality that it borders on madness. There is no rational or scientific way that organised religions can have a little of truth or factual reality because of the very reason that these books are entombed in the time that they were written. These books should therefore simply be viewed as limited parables and historical fiction, as well as a lesson in how millions of people can be so easily controlled.”

“We must ensure that the people who have been fooled for so long by fictitious belief systems utilised to control humans do not get too angry when they realise that what they believe in is nonsense written by humans utilising human created language. This could be dangerous for society, so we must either let them carry on believing their fiction or try to somehow support them when they realise the truth,” Dr Sanreso said.