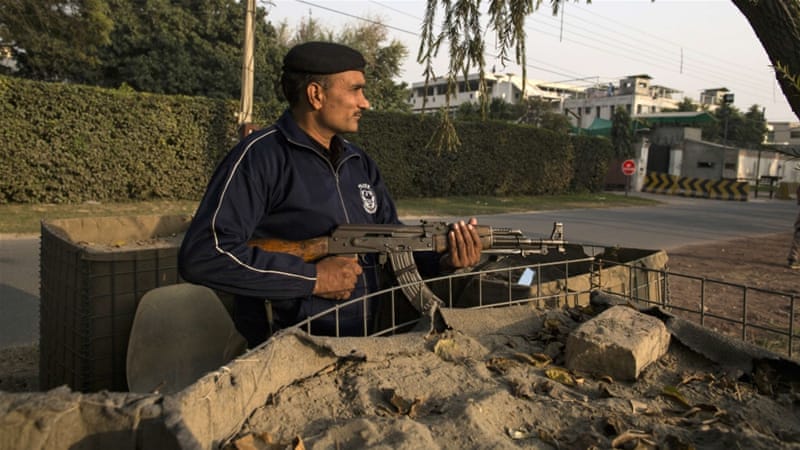 More than 250 members of the Ahmadi sect have been killed since 1984, according to the community [Reuters]

Islamabad, Pakistan – Three members of Pakistan‘s persecuted Ahmadi sect have been sentenced to death for blasphemy by a court in the central town of Sheikhupura, a community spokesperson said.

The three men were arrested in May 2014 after they tore down religious posters in Bhoiwal, a village about 22km southwest of the city of Lahore.

Khalil Ahmed, a fourth accused, was shot and killed in police custody just days after the incident took place.

While the accused claimed the posters carried anti-Ahmadi slogans, the prosecution said they carried religious significance and that tearing them down was tantamount to insulting the prophet.

Bigotry against Ahmadis, a constant in Pakistan

Saleemuddin said that the Ahmadi community would challenge the trial court’s decision in the high court.

Ahmadis are a sect that consider themselves Muslim but whose faith is rejected by the Pakistani state. There are around 600,000 Ahmadis in the country and several million around the world.

Members of the sect face three years in prison for referring to themselves as Muslim, to their places of worship as mosques or to their call to prayer as “azaan” under Pakistani law.

Last year, at least six Ahmadis were killed in planned attacks, according to local media reports.

Since 1984, when the blasphemy laws were amended to include several Ahmadi-specific clauses, more than 250 Ahmadis have been killed, according to data collected by the community.

Pakistan’s strict blasphemy laws prescribe a mandatory death penalty for anyone found guilty of insulting Prophet Muhammad, and life imprisonment for those found to defile the Quran.

Those accused often face the threat of murder, even if they are acquitted by the courts.

Since 1990, at least 74 people have been murdered over blasphemy allegations, according to a tally maintained by Al Jazeera.

Those killed include people accused of blasphemy, their lawyers, family members and judges adjudicating blasphemy cases.

On Tuesday, Muhammad Safdar, a member of parliament and son-in-law of recently dismissed Prime Minister Nawaz Sharif, launched a scathing attack against Ahmadis in the parliament.

“These people [Ahmadis] are a threat to this country, its constitution and ideology. This situation is heading towards a dangerous point,” he said while calling for them to be barred from serving in the military or judiciary.

Safdar was not challenged by any other member of parliament at the time, although some political leaders have distanced themselves from his remarks since then.

“These statements create an atmosphere of fear,” said Saleemuddin. “If these things are being said on the floor of the house, then what do you think will happen in the streets?”