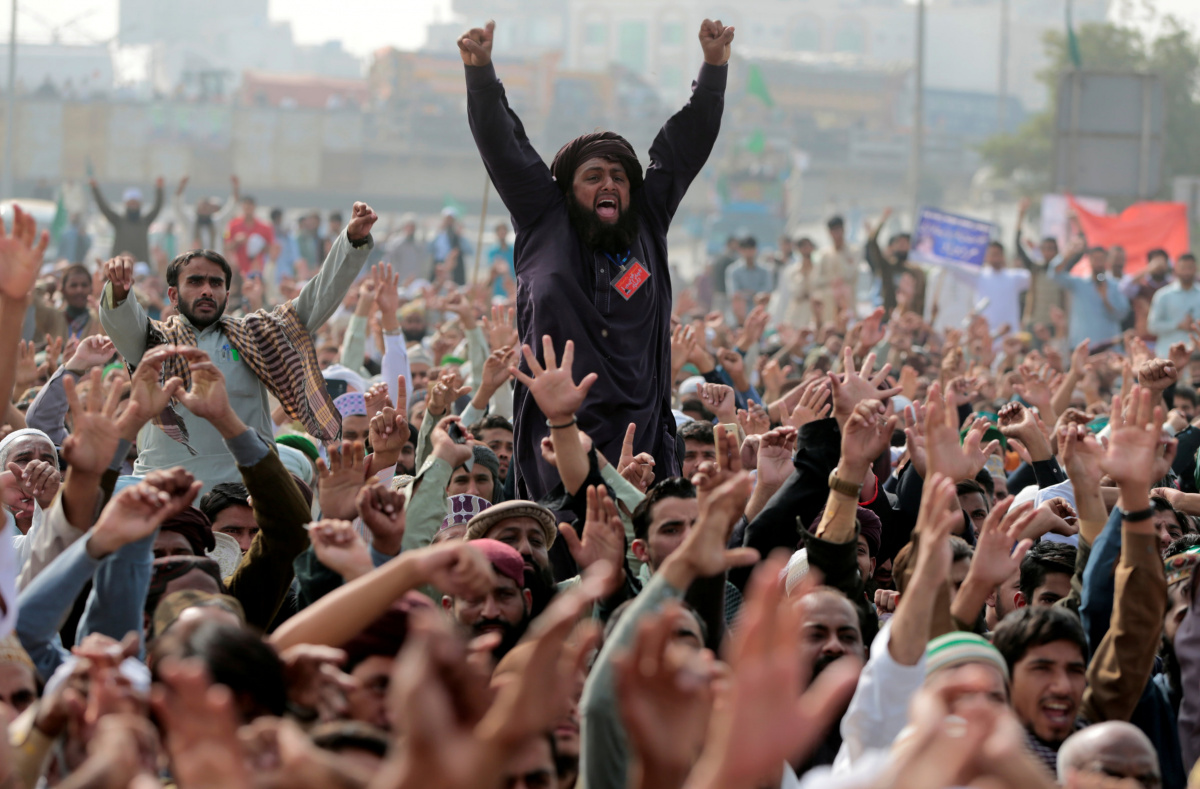 Last year in december, a sit-in led by cleric Khadim Hussain Rizvi and his Tehreek-e-Labaik Ya Rasool Allah (TLY) political party brought the Pakistani capital of Islamabad to a two-week standstill.

While the event will eventually recede from memory, its implications will be far reaching and long lasting. Indeed, the sit-in barely mustered several thousand participants, but its impact can’t be overstated. Above all, it reflects the dangerous evolution of extremism in Pakistan.

The protest, which occurred at the Faizabad interchange connecting the cities of Islamabad and Rawalpindi, was motivated by a change that Pakistan’s law minister, Zahid Hamid, had made to an oath that must be uttered by newly elected parliamentarians. The change (which was quickly reversed) pertained to the part of the oath declaring Muhammad as the final prophet. TLY denounced the move as a conspiracy to undermine the status of the Prophet Muhammad, and demanded Hamid’s resignation.

One of us (Michael) was in Islamabad several days before the sit-in began, while the other (Adam) was there while the event was unfolding. Both of us found an unsettlingly stark contrast between the state of minds of the government and the protestors.

In the days leading up to the protest, the government appeared scared. Blockades were erected well before the protesters arrived, snarling traffic across the entire city. Travel anywhere around Islamabad and Rawalpindi became a nightmare. The city was effectively placed on lockdown in anticipation of a small group—numbering not more than a few thousand—that many had never heard of.

Later, once the sit-in was in place, a walk through the interchange yielded some striking sights. Young men with large sticks patrolled on-ramps as empty buses blocked street lanes. TLY members manned the main checkpoint, cheerfully frisking passersby and acting as de facto traffic police. Others dozed on an eerily empty highway.

What stood out about the sit-in at that moment was not its chaos, but its calm. Not to mention a serene yet strong sense of purpose from the protestors.

In conversations, TLY members had nothing to say about geopolitics or domestic politics. Instead, their main message—other than heaping scorn on Ahmadis, a beleaguered Muslim minority community that many hardliners denounce as apostates—was this: “We are only here to protect the dignity of the Prophet, peace be upon him.” They insisted that their event was both peaceful and necessary.

The protestors’ tranquility contrasts with the fiery speeches made by Rizvi, their leader, in recent months. In one video, Rizvi angrily laments that many Pakistanis were prevented from attending the 2016 funeral of Mumtaz Qadri—a policeman executed by the state for having executed Punjab Province Governor Salman Taseer in 2011 for daring to speak out against Pakistan’s draconian blasphemy law—while the entire country came out for beloved philanthropist Abdul Sattar Edhi’s funeral that same year, even though, according to Rizvi, his charity raised “16,000 illegitimate children.” Rizvi’s rhetoric is explicitly violent. He has called on abducted liberal social media activists to be killed, and he defends the extrajudicial execution of alleged blasphemers, many of whom are religious minorities falsely accused of this charge. “Death to blasphemers” is one of TLY’s rallying cries.

After a bungled attempt by police to break up the sit-in, a deal was struck. The protestors got everything they wanted—and much more too. Not only did the law minister step down, but the government agreed to take action against officials involved in the operation to clear the highway of protesters, and it agreed to release all arrested protesters. Additionally, it agreed to pick up the tab for all the property damage caused during the sit-in—even though much of it was inflicted by the protestors.

A deluge of op-eds excoriating the sit-in and its aftermath soon flooded both the English and Urdu press. However, by no means does this opposition represent a consensus view in the streets and storefronts of Pakistan. Let’s be clear—the number of supporters of TLY in Pakistan far exceeds the several thousand that shut down Islamabad (and to be fair, the TLY’s core grievance—the law minister’s change to an oath involving the Prophet Muhammad—was certain to resonate in a big way in a nation as religiously conservative as Pakistan). Remarkably, even the father of a baby that died because road closures related to the protest prevented it from getting medical care declared that TLY was on a “sacred mission.” Such support for a party whose leader openly advocates the killing of religious minorities speaks to the radicalization that has swept across Pakistani society.

One can attribute this radicalization in part to the easy access to hate speech in Pakistan—which emanates from public school textbooks, religious sermons, television screens and social media. But the state, with its tendency to court extremists for the sake of national interests or political expediency, is also complicit in this story.

The Pakistani military, as is well known, has supported extremists to help advance Pakistani interests in Afghanistan and India. However, it’s not just the military that has curried favor with militants. In 2010, Rana Sanaullah, a senior member of the now-ruling Pakistan Muslim League-Nawaz (PML-N) party and the Punjab province law minister, appeared at a campaign rally with a by-election candidate linked to Lashkar-e-Jhangvi (LeJ), a sectarian extremist organization. Unfortunately, in Punjab, traditionally an area of political strength for both PML-N and LeJ, appealing to LeJ supporters for votes may sometimes make good political sense.

When TLY placed third in a September 2017 by-election to replace the National Assembly seat of the disqualified prime minister Nawaz Sharif, reminders were issued that Islamists have never won an election in Pakistan. Indeed, they rarely perform well at the polls. However, with concessions from the security establishment and political elite alike, Islamists don’t need to win elections when they can legislate from the public square or simply dictate from the street.

Recall when an anti-Muslim YouTube video, Innocence of Muslims, triggered riots in 2012 that killed at least nineteen in Pakistan. The response from the civilian government, led by the ostensibly liberal Pakistan People’s Party, was to ban YouTube altogether. Later, in 2016, legislation was passed that called for seven years of imprisonment for any person convicted of glorifying terrorism. However, today, prominent media personalities like Orya Maqbool Jan can call for Ahmadis to have their “necks broken” and face no repercussions whatsoever.

This is all troubling enough. And yet, the TLY protest portends a new and dangerous phase of extremism in Pakistan. The protestors were Barelvis—members of a Sunni Muslim sect regarded by many observers as moderate relative to Deobandism and Salafism, sects which are embraced by most of Pakistan’s terrorist organizations. However, after Qadri, a Barelvi, killed Taseer in 2011—and after Qadri was executed in 2016—Barelvis were galvanized. In 2014, Tahir-ul Qadri, the Barelvi leader of a global Islamist movement called Minhaj-ul Quran, and Imran Khan, leader of the Pakistan Tehreek Insaf (PTI) political party, staged a long sit-in in Islamabad—and, in so doing, made the government look bad. One can imagine that Rizvi and his ilk took careful note of that earlier sit-in’s effectiveness. Indeed, extremists within the Barelvi movement have adopted Mumtaz Qadri’s legacy as their battle cry and, inspired by the 2014 sit-in, appear to be embracing street protests—including the more recent Islamabad sit in—as a tactic of choice.

It’s no surprise that Barelvi extremists have placed blasphemy at the top of their agenda. The Barelvi movement was founded by Ahmed Raza Khan in the late nineteenth century, and he adopted the name Abdul Mustafa (Servant of the Chosen One) to express his love for the Prophet Muhammad. He issued fatwas alleging blasphemy against prominent Deobandi leaders when they criticized him for ascribing divine attributes to the Prophet Muhammad. Defense of the Prophet Muhammad against any perceived insult is a hallmark of the Barelvi creed.

Barelvis’ practice of some Sufi rituals has led the movement to be viewed by some as synonymous with moderation. However, Barelvis aren’t the only ones to embrace Sufism—some Deobandis do as well—and the syncretic nature of Barelvi rituals should not be mistaken for a commitment to tolerance or pluralism.

This all begs a troubling question: How does an overwhelmingly illiberal Pakistani society avoid the pitfalls of extremism? It’s one thing to fight terrorists on the battlefield, as Pakistan has done fairly well in North Waziristan. Tackling the more complex issue of extremism, however, is a far different and more challenging beast.

Some commentators suggest the Pakistani military supports Barelvi activism, contending that the military views such a move as a safer alternative to backing Deobandi-influenced militant groups—some of which have turned against the state (witness the example of the Pakistani Taliban). However, in reality, the kid gloves treatment amounts to playing with fire. Indeed, capitulating to the demands of hardline Barelvi activists invariably strengthens and emboldens them, thereby raising the specter that the likes of TLY will feel increasingly comfortable imposing their dangerous views—while believing they can get away with it. Ultimately, this will make Pakistan a less tolerant place and increase the likelihood of extremism and terror.

Adam Weinstein is a researcher who focuses on South Asia and Iran. Michael Kugelman is deputy director with the Asia Program and senior associate for South Asia at the Woodrow Wilson International Center for Scholars.