SLAMABAD (AP) – More than 3,000 Islamists camped out on the edge of Pakistan’s capital, demanding the removal of the country’s law minister over a recently omitted reference to the Prophet Muhammad in a constitutional bill.

The rally began with a few hundred members of the small radical Tehreek-i-Labaik Ya Rasool Allah party who had gathered earlier this week at the main Faizabad crossing outside Islamabad.

By Friday afternoon, the gathering grew to over 3,000, disrupting public life and prompting police to set up shipping containers on the throughway to prevent the protesters from entering the city. The demonstrators sought the removal of Zahid Hamid, although he has apologized and said the omission of the reference how Muhammad is the last prophet in Islam was a clerical mistake that was later corrected by the parliament. 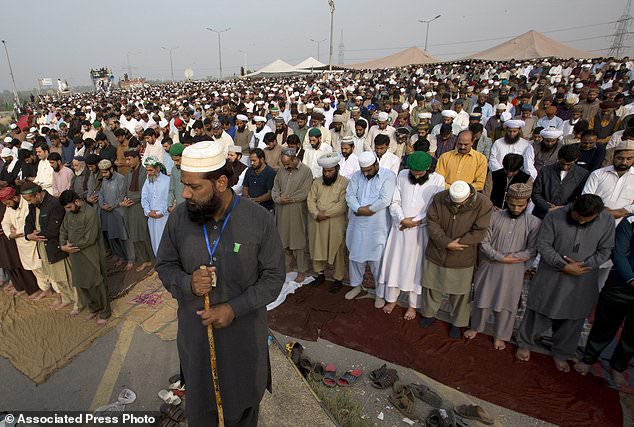 A supporter of the Pakistani radical religious party, Tehreek-i-Labaik Ya Rasool Allah, stands guard as people offer Friday prayers during a sit-in protest in Islamabad, Pakistan, Friday, Nov. 10, 2017. Hundreds of Islamists have camped out on the edge of Pakistan’s capital to demand the removal of the country’s law minister over a recently omitted reference to the Prophet Muhammad in a constitutional bill. (AP Photo/B.K. Bangash)

But demonstrators claim Hamid made the omission purposefully to appease the minority Ahmadis sect.

Addressing emotionally charged demonstrators, Khadim Hussain Rizvi, the head of the Tehreek-i-Labaik Ya Rasool Allah party, said they will not end their protest until the government has sacked Hamid.

“We will not allow anyone to change Islamic laws,” he said, as people chanted: “We will die to protect the honor of the Prophet.”

The rally drew criticism from residents and rights activists when an infant died Thursday on the way to a hospital due to the road blockades in Islamabad. Police say they have charged the rally’s organizer, Rizvi, with manslaughter following complaints from the child’s parents who claim his life could have been saved had they reached the hospital in time.

The government has said it wants the protesters to peacefully disperse and authorities are in communication with Rizvi – who has not yet been detained over the charge – to end the sit-in along with the other clerics in attendance.

The rally has also caused inconvenience to commuters as authorities have suspended the only bus service linking the nearby garrison city of Rawalpindi with Islamabad.

Authorities have hinted at using force over the weekend if their talks with Rizvi fail.

On Friday evening, authorities started cordoning the rally amid rumors of imminent action against the demonstrators, who have virtually sieged an important entry gateway into the capital.

Pakistan has also stepped up security at places of worship for Ahmadis, as the protesters are accusing Hamid of transgressing to appease the small sect.

The Ahmadi faith was established in the Indian subcontinent in the 19th century by Mirza Ghulam Ahmad, who followers believe was a prophet.

Pakistan’s parliament declared Ahmadis non-Muslims in 1974, and they are often targeted by Islamic extremists, who view them as heretics. 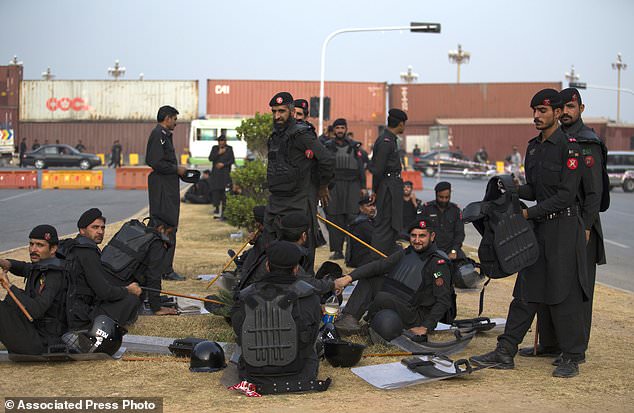 Pakistani government security personnel standby near the Parliament during a sit-in protest by the religious radical party, Tehreek-i-Labaik Ya Rasool Allah, in Islamabad, Pakistan, Friday, Nov. 10, 2017. Hundreds of Islamists have camped out on the edge of Pakistan’s capital to demand the removal of the country’s law minister over a recently omitted reference to the Prophet Muhammad in a constitutional bill. (AP Photo/B.K. Bangash)

3 thoughts on “Islamists rally near Rawalpindi and Islamabad, demand removal of Law Minister”