We live in a twisted world, where right is wrong and wrong reigns supreme. It is a chilling fact that most of the world’s leaders believe in nonsensical fairytales about the nature of reality. They believe in Gods that do not exist, and religions that could not possibly be true. We are driven to war after war, violence on top of violence to appease madmen who believe in gory mythologies. These men are called Christians, Muslims and Jews. 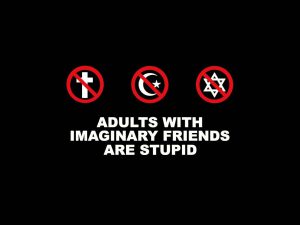 Osama bin Laden is insane. He believes God whispered in the ear of Mohammed 1,400 years ago about how he should conquer Arabia. Mohammed was a pure charlatan — and a good one at that. He makes present religious frauds like Pat Robertson look like amateurs.

He said God told him to have sex with as many of the women he met as possible. I’m sorry, I meant to say “take them as wives.” God told him to kill all other tribes that stood in his way or that would not placate him with assurances of loyalty or bribes. God told him, conveniently, that everyone should follow him and never question a word he said.

He sold this bag of goods to the blithering idiots who lived in the Arabian Peninsula at the time. If that weren’t shockingly stupid enough, over a billion people continue to believe the convenient lies that Mohammed told all that time ago — to this very day.

George W. Bush is the most powerful man alive. He is a class A imbecile. He is far less intelligent than the average Christian. But like most of the others, he believes Jesus died for his sins. That idea is so perverse and devoid of logic it should shock the conscience. Instead, it gets him elected, and earns him the reverence of a great percentage of America. America! The most advanced country in the world — run by a bunch of villagers who still believe Santa Claus is going to save them.

There is no damn Easter Bunny. There is no Jesus waiting to return. Moses never even existed. These were all convenient lies from the men of those times to gain power. Their actions were rational — they wanted to deceive their brethren so that they could amass power. I get their motivations. But I cannot, for the life of me, understand our motivations, thousands of years later, still following the conmen of yesteryear into our gory, bloody, violent end.

Jesus is said to have said on the cross, “My God, My God, why have you forsaken me?” Because Jesus was insane and the God he thought would rescue him did not exist. And he died on that cross like a fool. He fancied himself the son of God and he could barely convince twelve men to follow him at a time when the world was full of superstition.

Excellent marketing by some of his followers would later rescue his botched effort. How many people saw his miracles? One? Twelve? Eighty? Why didn’t he show the whole world? Not because this is some giant pop quiz by God to test us — but because he did not perform any miracles!

Even his apostles can’t agree on what miracles he supposedly carried out or when he carried them out. Or whether he returned after death or he didn’t. Whether they saw him in person or just as a vision. Rational human beings shouldn’t believe this kind of nonsense. Yet most of the world does.

Origin and various theories of religion

If a man today killed his only son to show how much he loved other people, he would be considered a madman, locked in jail and earn society’s contempt. Yet we think this is some sort of noble act by our Father in Heaven.

In Heaven? What, with the harps and the winged angels and the 72 virgins? My God, how stupid do you have to be to believe that?

I know most of you don’t actually read your religious texts, and when you do, you assiduously try to avoid the parts that make no sense whatsoever or hide underneath the comforting grasp of your religious leaders who have concocted a bunch of circular logic (a crime to even use that word in regards to Christianity, Islam or Judaism) to shield you from the obvious folly of the written text.

So, I’m not calling you stupid if you haven’t really read the material. And I know how powerful brainwashing is. We all received it when we were young and it is exceedingly difficult to break its grasp. But people dance around the issue out of politeness because they don’t want to call you what you are — ignorant.

There are a lot of people I love dearly and respect wholeheartedly who believe in religion. I hate to do this to them. But we have killed far too many people, wasted far too much time on this nonsense for us to keep going in this direction for fear of offense.

Jesus was a lunatic. God is not coming to your rescue. He hasn’t come to anyone’s rescue in thousands of years, including Jesus. Mohammed was a power hungry, scam artist and ruthless conqueror. Moses and Abraham were figments of the imagination of some long dead rabbi. He would probably laugh his ass off at all of you who still believe the fairytales he made up thousands of years ago. He probably wouldn’t even believe it if you told him.

Did I mention Judaism? The chosen people? Come on, get off it. People walk around in clothes from 18th century Russia, thinking they have been chosen by God when they look like a bunch of jackasses. I’m tired of all the deaths because we did not want to give offense. Orthodox Jews are wrong and ridiculous.

As are the orthodox and fundamentalists of all of the religions. It says in the Bible that it is an abomination to wear clothes made of two different cloths or to eat shellfish. If you think God will hate you because you mixed wool and linen or because you ate some shrimp, you are insane.

How long are we going to dance around the 800-pound gorilla in the room? The world is run by madmen. It’s not just Bush and bin Laden. It is the leader of all of the countries in the Middle East, almost all of the Americas and most of the rest of the world.

Have I offended you? That’s too bad. Stop killing each other in the name of false and ridiculous Gods and I will stop ridiculing you. Trust me, your offense is much worse than mine.

Right now as you read this, there are ignorant, hateful Muslims teaching other ignorant Muslims how to put on a suicide belt. There are orthodox Jews telling other Jews how they must never leave their “holy land” no matter what the consequences are to other human beings. They assure their followers — remember, they are not the chosen ones, we are. If we crush and oppress them, don’t worry, God will excuse it, and even desires it, because He is on our side.

There are maniacal Christians who are praying for the end of time. Who are hoping that most of the world’s population is wiped off the face of the Earth by their vengeful and murderous God. Whom they believe is, ironically, a loving God. Unless, of course, you make the fatal mistake of not kissing his ass and appeasing him, in which case he will slaughter you and condemn you to eternal torture. What kind of sick people believe this?

The kind who live next to you. The kind who voted for George Bush. The kind who send their religious leaders to the White House to argue against even-handedness in the Middle East because it would prevent their sick prophecy. The kind who have undue influence over how we use the greatest and most lethal army ever built by man.

If you don’t want to be called ignorant or misinformed, then get informed. Learn the real nature of our universe and put aside old wives tales about resurrected Gods, omniscient prophets and a guy who could split the Red Sea but couldn’t find where he’s going in the desert for forty years.